Humans have long discovered the multiple uses of animal excrements. They have been using manure as fertilizer or fuel form the neolithic period, and have known how to get flammable gas from decaying organic matter since the 17th century. Astronauts and farmers alike are aware that urine contains useful nitrogen, and feces is chock full of practical materials. Small-scale anaerobic digesters are commonplace in many developing countries, while larger plants producing heat and electricity from animal manure and human sewage have long been used in the west. Yet the energy in most excrement still goes to waste. Greater exploitation of this plentiful resource has been held back by the availability of artificially cheap fossil fuel.

The paradigm of large-scale, governmentally subsidized operations is not necessarily the best of solutions. Centrally producing energy from biomass in a large facility somewhere uptown entails waste being collected, trucked and moved before processed. The energy finally extracted from it might have all the benefits of biomass, but all the procedures foregoing and following the extraction are neither cleaner nor greener than any transportation and production scheme. Innovators realized they had to come up with some decentralized appliances, some on-site ways of harnessing the power of poop. And it didn’t take long for this crappy business to bear fruit…

What to do with doggy doo?

Brian Harper is the proud inventor of the UK’s first dog-poo powered streetlamp. His idea is simple enough: dog walkers deposit the product of a hearty walk into a hatch and turn a handle. The contents are stored until dusk and then broken down by microorganisms in the anaerobic digester, producing methane to fuel the light, as well as fertilizer. Harper, who started work on the machine three years ago after becoming fed up of seeing plump little bags hanging in trees and on grass verges, reckons that 10 bags will power the light for two hours each evening.

Collecting dog waste separately prevents it contaminating the recycling streams, allowing cities to divert both away from landfill sites. This is why politicians in Ontario, Canada, asked dog walkers to drop their pet’s poo into concrete storage units in three different parks. These units are periodically emptied by trucks that take it to a large central plant where it is broken down along with other forms of organic waste to produce methane and then electricity. The fertilizer byproduct is sold to farmers. Analysis of the first five months of an 18-month trial suggests that at the current rate, the scheme would generate enough electricity to power 13 homes and remove 630kg of CO2 emissions from the atmosphere. If Harper’s idea ever reached Canada, the city planners would find their perfect match. 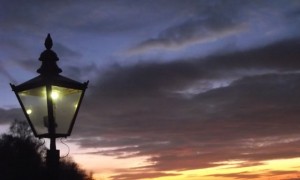 UK-based waste treatment company, GENeco has converted a cute VW Bug into a bio-fuel guzzling machine. Using the solid waste from 70 homes, the Bio-Bug could drive 10,000 miles a year with a fuel-efficient of 5.3 miles per cubic meter. The Bug can also run on traditional gasoline as well. The Bio-Bug, unlike other bio-fueled prototypes, runs more cleanly, with a comparative performance to petroleum-based fuels. In 2014 GENeco launched its Bio-Bus, the UK’s first bus powered by gas generated from sewage and food waste. Capable of running for 300km on a full tank, it produces significantly less carbon dioxide and air pollution than fossil fuel-powered equivalents. It ran in trials between Bath and Bristol Airport and then, naturally, on Bristol’s “Number 2” bus route. The company, which is a subsidiary of Wessex Water, also runs a facility that processes human sewage and food waste to generate enriched biomethane. The mathane is injected into the grid, providing fuel for some 5,000-6,000 homes.

Big tech companies have recognized the power of poop from 2010. Hewlett Packard, Microsoft and Google have investigated partnering with American dairy farmers, considering the possibility of creating poop-powered data centers. The initial equipment investment may be what is holding them back, but the renewable power is great, with the average cow pooping enough power to light a 100 watt lightbulb. The economic benefits of this sort of system are pretty obvious. Data center operators would have access to a reliable source of clean energy, presumably at a competitive if not lower cost than what’s on the market. Dairy farmers would make money selling electricity to data center customers – roughly $2 million annually in revenue after the first two years.

Poop can be construction material

Building off of poop’s molding capabilities, students at the Prasetiya Mulya Business School in Indonesia developed the EcoFaeBrick, a lightweight brick made from cow patties. The durable bricks are 20% stringer AND lighter than clay bricks. Since the material is natural and not quarried, their usage would cut down on the environmental destruction that quarrying creates. This creates a solution for cow waste, while providing local farms with a new revenue stream.

Leave a reply Click here to cancel the reply